Took part in the creation of Amma Assis, Founder of the Touch Line Institut 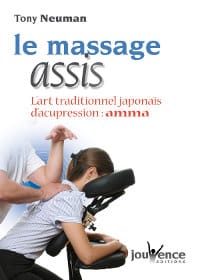 Massage therapist graduated from Boulder School of Massage Therapy (Colorado, USA) – Amma Institute San Francisco graduate, participated in the creation of the seated amma kata – Founder of the Touch Line Institute in 1995 which has trained more than 13,000 practitioners

Originally from Washington, D.C. and New-York City, USA, Tony NEUMAN – CMT, began his career at the “Boulder School of Massage Therapy” in Boulder, Colorado. Tony was a private masseur in the “Hamptons” in NYC for many famous personalities (Calvin KLEIN, Steven SPIELBERG, Kathleen TURNER …) before developing the Amma Seated Massage in the USA.

He has personally trained more than 13,000 practitioners in seated amma massage and reclining amma massage in 13 countries for 25 years. Her book: “The Seated Massage – Traditional Japanese Art of Accupressure: Amma” – Editons Jouvence has been published in 7 languages.

Tony’s Vision is to make touch economically, temporally and psychologically accessible to everyone! Its mission: to offer the highest level of competence and quality of services in amma massage, in a manner that is both very human and very professional!

After training in Casablanca in 2012, Tony fell under the spell of the orient and decided to import and develop seated massage in Morocco.

The head office of Touch Line Maroc has since been established in Casablanca and a first team of certified practitioners has been set up.

The sitting Amma: the traditional Japanese art of acupressure

The techniques of amma, born 4000 years ago in China were called “AN MO”.

the monks spread them as far as Korea, then Japan, or 1300 years ago, they became “ANMA”. (Japanese pronunciation but altered by Westerners who call them “AMMA”)

The intention of his techniques is to relax but also to stimulate simultaneously so that the client is relaxed during the sequence but also alert after it.

They are very effective in improving the circulation of “KI”, the vital energy. increasing this flow of vital energy prevents the onset of disease and makes the client feel more energized.

In reality, it is not about increasing energy but making it more available.

Besides the physical aspect of the benefits of amma, there is a real psychological contribution.

Thanks to the amma massage, clients can reconnect with themselves and usually leave the session extremely enthusiastic.

Their back pain didn’t go away, but they found each other and were able, finally, to reconnect with themselves.

Tony Neuman’s Amma Assis training has a beginning, a middle and an end.

Your customers who love the sitting amma will love the lying amma!

Tony Neuman created the recumbent amma kata in 2000 to complete the amma offer.

With the lying amma, you learn a very specific kata (protocol) of “amma” accupressure.

The session lasts one hour and covers the entire body, on a client lying and dressed on a massage table.

Why a marketing training?

Unfortunately it is not enough to simply know how to massage well, with a lot of love, to make a profession of it.

Then as they go for it, they quickly find themselves confronted with setbacks and disheartening frustrations.

This day of coaching-marketing is structured to provide the well-meaning practitioner with the tools necessary to make massage a fulfilling career, both professionally and spiritually and financially.

This course, presented by Tony, is the culmination of over 15 years of experience in the Sitting Amma market.

The business market may seem obvious on the surface, but in reality it is the most difficult sector to approach.

Tony will show you the other seated massage markets, how to get there, as well as the pitfalls to avoid.

You will learn how to create a seated massage business based on your personal values ​​and without falling into the old techniques of dishonest marketing.

Amma Assis: I was trained by Tony! This training is the best I have taken !! The technical aspect is essential, and repetition is essential. We got a CD at the end of the course, it allowed us to practice and improve. The Marketing aspect is super clear with Tony. Thanks to him, I loved taking the massage everywhere. I validate 100%. Seriousness and solidity … Roots and wings to get started …

Amma Assis: The best program I took this year !!! The amma massage training with Tony had an impact on me! He is a very patient and talented teacher. My clients are delighted when they receive the Amma technique he taught me !!

Amma Assis: Tony’s class had such a powerful and positive influence on me! His passion and enthusiasm for chair massage is contagious!

Amma Assis: “I read Tony’s book about seated massage in Brazil 20 years ago and it was an eye opener! He motivated me so much. Thanks to his inspiring teaching, I now own 13 spas from seated massage at airports in Sao Paulo, Brazil and I had the honor of bringing him to teach in Brazil last year! “

Amma Assis: “Tony’s class changed my life. I found his training to be passionate, dynamic, inspiring, professional and very human. Thanks to his teaching, I now lead the life I have always dreamed of as a massage therapist. nomad “on the road, living in my motorhome and massaging across the country! I’m living my best life! “

Amma Assis: “This is the best class I have ever taken! I was so scared that I couldn’t make a living doing massage. But today I do massage full time and I love my job, thanks to the confidence I have gained in Tony’s marketing course. “